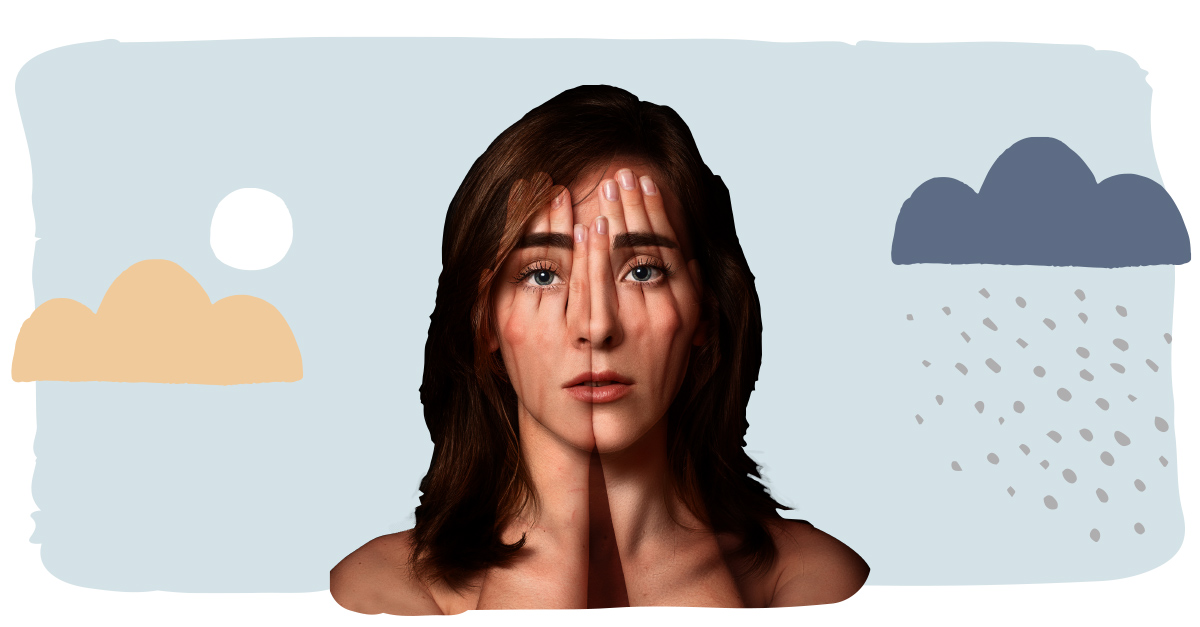 We all lie more than we’d like to think we do – to look good, to avoid trouble, to keep safe. But addicts lie as if their life depends on it. They say and do whatever is necessary to hide their addiction from others and themselves. Their slide into self-deception escalates as their disease worsens. They convince themselves: I can handle it. Next time it won’t be so bad. I’m not hurting anyone.

The cost for lying is high for addicts. Yet they often become beacons for honesty once they are in recovery. Maybe what addicts learn in recovery has something to teach all of us about how to be more truthful.

Compulsive gambler Terra Carbert says her lying was a “form of self-protection, a way to manage how other people perceived me.” Until the casinos became her go-to place, Carbert considered herself an honest person, even being “very intentional about telling the truth.” But as her casino trips and her losses multiplied, she lied. “I was lying about where I was, who I was with, why I needed to borrow money.”

She lied so she could keep chasing after her drug of choice — money. Driven to snatch the big win, she would place yet another bet, never doubting she could stop doing so anytime. She was sure she could beat the odds.

The lies went beyond hiding her addiction, Carbert says now, three years into recovery. “I pretended my life was great,” she says, an easy enough claim with her career successes and high earnings. But her happy public face covered up feelings of grief over the death of family members. With little understanding of how to manage her emotional life, she went to the casino to escape, to have fun.

Then it became the place to go to escape boredom, to celebrate, to deal with a bad day. It became, Terra says, “like a trusted companion, no matter what mood I was in.” She would even head for the slot machine that her deceased grandmother used to enjoy, to feel a kind of communion with her.

Hiding from his mother

The cost for lying is high for addicts. Yet they often become beacons for honesty once they are in recovery. Maybe what addicts learn in recovery has something to teach all of us about how to be more truthful.Like Carbert, Harry Cunnane had always thought of himself as an honest person, until drugs came to dominate his life. In a new book he co-authored with his mother, U.S. House of Representatives member Madeleine Dean, the authors write about how deception nearly destroyed him.

Nothing in his upbringing would have predicted this descent into deceit. “I had anything and everything I could have hoped for – love and support all around me,” Cunnane says in an interview for this article. “I had a strong moral sense of what was right and wrong.” But once drugs became his master, he had to lie to keep from being found out.

When he dropped out of college to work low-wage warehouse jobs, routinely showing up late for work, and he couldn’t manage his money, his mother questioned him. “Is it drugs?” He lied. She cried. He cried. The deception went on.

When Cunnane learned he would become a father, he resolved to change so he could be the kind of dad he wanted to be. Yet, “the night my daughter was born, I continued to get high,” he says. “My word didn’t carry any weight.”

For addicts like Carbert and Cunnane, the lies keep compounding, says Susan Campion, a counselor in the outpatient gambling treatment program at Fairview Health Services in Minneapolis. “They get excited because they’re getting away with something. They don’t think the rules apply to them. They lie so much they eventually convince themselves.”

As Shawntrell Moore, a Chicago-based addiction counselor for Hazelden Betty Ford Foundation, points out, the addict “loses control of their ability to make healthy, conscious decisions.” When the person agrees to go into treatment, recovery can be a slow climb to honesty. They aren’t able to see the full scope of their problem. Says Moore, “They think, ‘It’s OK for me to have one drink’ or ‘This isn’t affecting anyone else, just me.’”

Admitting our deceit is hard

The tendency to get caught up in our own self-deceptions is not limited to addicts, however. Nor is our reluctance to admit we’re lying. In her book, Lies We Tell Ourselves: The Psychology of Self-Deception, clinical psychologist Cortney Warren, PhD, says, “When we acknowledge our lies, it forces us to face the parts of ourselves that we don’t want to admit.” Yet, she says, “Our tendency to deceive ourselves is part of human nature.” A kind of survival strategy. We “reorganize the truth in a way that is more consistent with what we can psychologically tolerate.”

When lying has serious enough consequences, we are sometimes forced to face it head-on. But even then, the truth about our lying may be too hard to swallow in one chunk.

Wavering between truth and lie

Addicts experience a lot of ambivalence, says Moore, a term he prefers over denial. “If you call it denial, they get defensive,” he says. They start justifying what they are doing. “Instead, I help them understand that ambivalence is part of the process of recovery.”

Moore says he asks questions that bring out how their substance abuse matches up — or doesn’t — with their personal values or goals. Questions like, “How does substance abuse benefit you?” He might then validate that their choice matches their goal of, say, alleviating stress at work.

That validation often surprises them, says Moore, and reduces their defensiveness. It may be the first time they feel that someone understands their motivations. From there it is easier to get clients to examine the negative effects of their using – noticing the barriers it creates to achieving important goals they have. They then may shift from lying about their using to agreeing that it is a problem. A short time later though, the lying may resume.

This ambivalence is normal, and Moore says he helps his clients become aware of it and manage it in ways that are realistic and meaningful for them personally. That might include anything from meditation to exercise to confiding in others who understand.

Recognizing ambivalence is one of four honesty activators we can all draw on, as we pursue more honest living, whether we’re in recovery or not. Since lying is a form of self-protection, we can recognize that we lie to feel safe – not a bad motive in itself, since protecting ourselves is a natural instinct. Before we’re ready to acknowledge our lying though, we may need to find safety in some other form. That may not happen overnight.

We may first need to find an understanding counselor, friend, or recovering addict who shows us understanding and acceptance when we tell them about our ambivalence. That acceptance can help reduce our shame and our hesitancy to tell the truth. 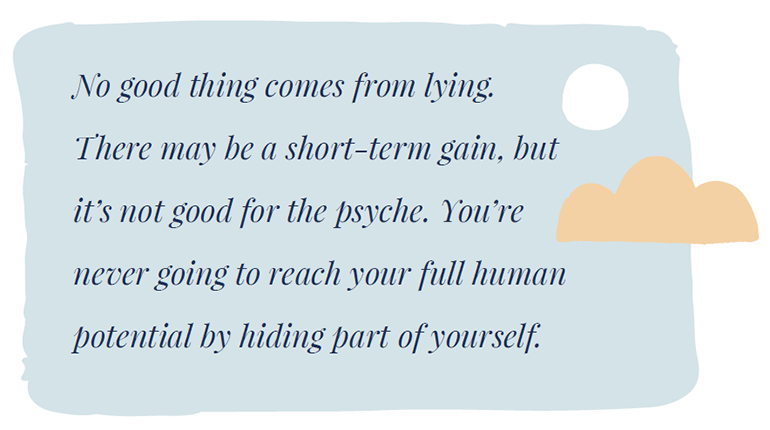 Identify values that matter to us

The second honesty activator is asking ourselves what we value enough that we’re willing to tell the truth to get it. Our children? Our health? Our sense of integrity? When Cunnane saw his parents’ bank statements spread across the dining room table with highlighted items showing where he had used their ATM card, he was forced to choose between values. This time, when his mother asked, “Is it drugs?” he said, “Yes.”

Says Cunnane, “I was so beaten down and exhausted from trying to keep track of all the lies, I didn’t have the energy to tell one more.” In that moment, Cunnane gave in to his values of ease and peace of mind, as well as a desire to regain the respect of his parents. “I was shocked that I said yes because I had always lied.”

To keep from lying again, we need to avoid circumstances where we are likely to deceive ourselves.For Carbert, her moment of truth was running out of any further money sources, after draining her life savings and maxing out her borrowing. She spent her full paycheck on her last casino trip and had nowhere else to turn. Gamblers Anonymous led her to the third honesty activator, avoiding temptation.

To keep from lying again, we need to avoid circumstances where we are likely to deceive ourselves. For Carbert, that meant no more casino trips. No bingo either, or silent auctions. “They felt like ‘action’ to me,” she says. She told her friends not to loan her money.

For Cunnane, it means avoiding any actions that might cause him to lie. “If I say I’m going to do things, I do them. I tell my family where I’m going, and I go there. I get there on time and get back on time. It’s doing the right things consistently.” He adds, “Before others can trust me, I have to begin rebuilding trust with myself.”

Rigorous honesty with yourself is essential for recovery, says Craig Johnson, addiction counselor for Club Recovery in Edina. That means, “Not lying about anything,” he says. For compulsive gamblers, that may mean not going into the gas station to pay for gas, if pull-tabs have been the usual form of gambling. It may even mean avoiding all gambling venues.

Otherwise, says Johnson, “The lie becomes, ‘The problem isn’t slot machines, it’s just lottery tickets,’ so then they start playing the slots.” Even having cash in their pocket is dangerous, says Johnson. “It’s like an alcoholic having a liter in the back of the car. Eventually they’ll drink it.”

“You have to put protectors in place,” says Campion. That may mean putting your money in a trust fund or getting a special credit card that won’t allow spending at casinos or online. It may mean locking your credit card so you can’t get credit on a whim.

A big trip-up for compulsive gamblers is the certainty in their mind that they’re “due,” says Johnson. They think they can control random events. Any exposure to the opportunity to beat the odds is high-risk for them, and must be avoided, he says. Once they learn to avoid these triggers and stop using, “they don’t need to lie anymore.”

Critical to avoiding temptation is the fourth honesty activator, accountability. For Carbert, that means her sister became her accountability partner, managing all her financial affairs until she could regain her own integrity with money. It also means attending recovery meetings and telling her friends and family about her addiction as well as her business failures.

She also turned to therapy and life coaching to help her deal with unresolved grief and trauma, so she could get past her longstanding lie of saying, “I’m fine.” She now offers life coaching to other women addicts in recovery, emphasizing the need to be truthful as they aspire for a better life.

“No good thing comes from lying,” says Carbert. “There may be a short-term gain, but it’s not good for the psyche. You’re never going to reach your full human potential by hiding part of yourself.”

Pat Samples is a Twin Cities writer, writing coach, and champion of creative aging. Her website is patsamples.com.

What 2020 Taught Me: Acceptance
Retreat into Deep and Meaningful Recovery
Head to the Barn to Horse Around: Equine Therapy and Recovery
354
SHARES
ShareTweetSubscribe 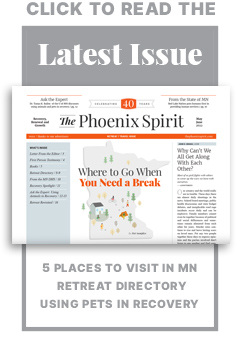 Most Read the Past 30 Days